Junk Removal can be a competitive industry, but you can really gain some ground in your business with an effective Google Ads campaign.

This particular campaign was run in Colorado Springs, and routinely brought in form fill and phone call leads on a regular basis.

As you can see from the screenshots here, the cost per lead was right around $25, and the phone call lead quality was good.

The leads you get from Google Ads campaigns aren’t just a bunch of emails. They’re inbound form fills and phone calls with people looking to solve a problem. In this case, the business had people reaching out to them who had junk they needed removed. 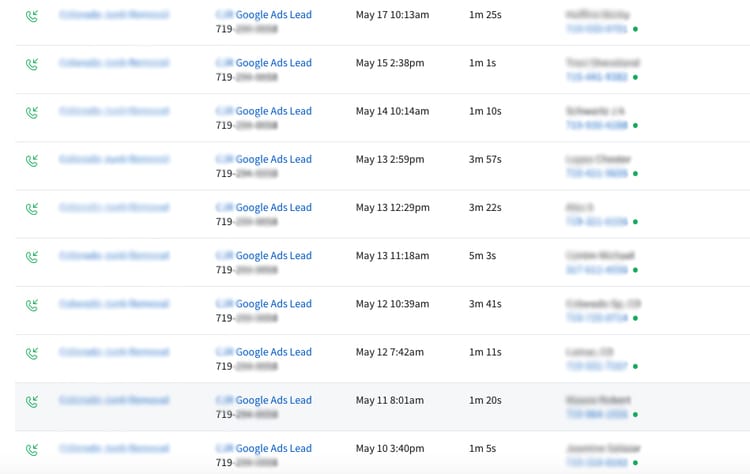 For this particular client, they had been running Google Ads for a while for their concrete and masonry business. Once I dug into their account, I noticed that things weren’t looking too good.

Over the course of 3 years, they had only generated 46 leads on their account, and each of those leads cost them $438.10.

After working with them for a few months, I was easily able to cut that lead cost way down to $25.67.

This got more lead flow going their way, and more jobs coming in through the door.

Within the first couple of months, they ended up closing a bigger deal that easily covered ad spend and more. You can see that screenshot below. 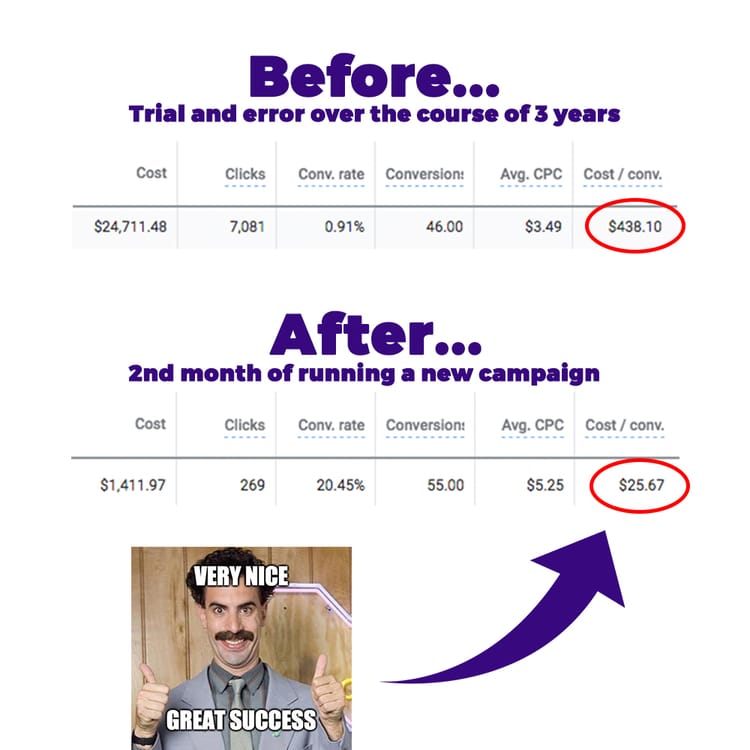 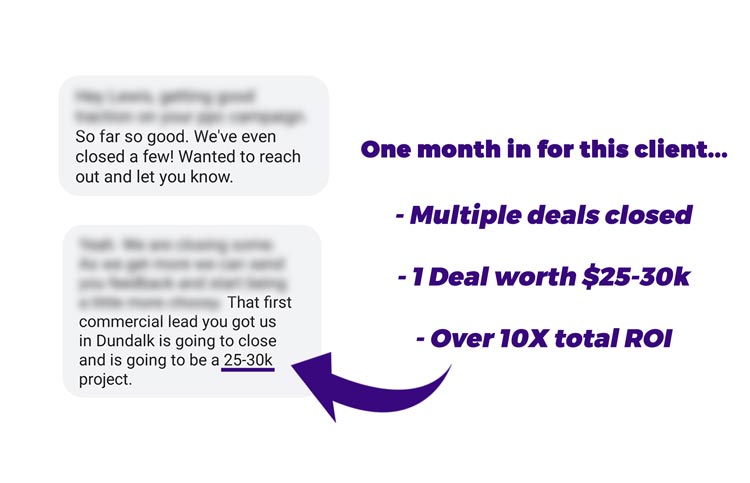 Typically, when you’re running a Google Ads campaign, a couple of the most important things to focus on are conversion rate and cost per lead.

Before I started doing work on this particular campaign, the client’s campaign was converting at the highest at 2%, but they were paying at least $300 per lead.

The main reason for this is because they were running a campaign sending traffic to their website’s homepage.

What I focused on here was cleaning up the campaign itself, building it out better, and then sending that traffic to a well designed landing page.

Conversion rates around 2% and paying over $300 per lead 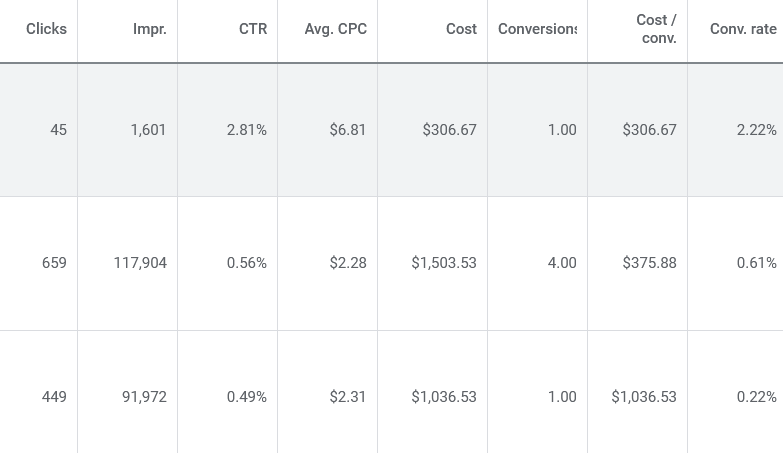 Conversion rates around 20% and paying about $75 per lead 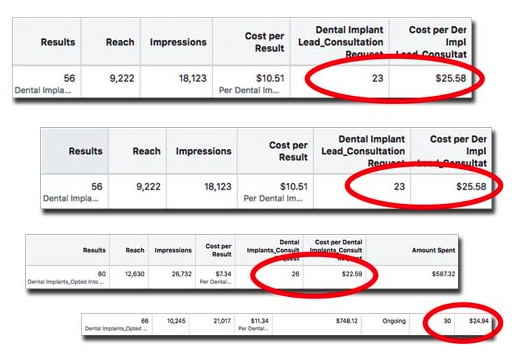 This particular campaign was for dental implants, and one of the practices was able to generated $21,500 in new implace patients on only $587.32 in ad spend.

The campaign put leads through an application process which had them completing a 14 question form to pre-qualify them for the procedure.

Definitely a more high ticket lead generation funnel as a dental implant case usually starts at $5,000 and goes up from there.

“Over the years I have worked with many companies in an attempt to increase new patient referrals. Sorry to say but most of them turned out to be more promises and less performance. That being said, working with Chris Down was a different story. During our time together I received more valid new patient leads than I had been able to achieve in the past. Chris is easy to work with and has a great deal of knowledge. Feel comfortable when it comes to putting your trust with him.”

I worked with Intuitive Powder Coating when they were just getting started up, and I built out a site for them and did some ongoing SEO on that site.

Because of this, they’ve had consistent business coming in over the years and have growth their shop 10x bigger from their early days. 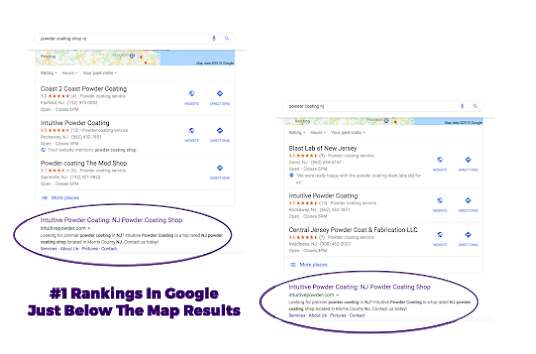 When I started working with IMP Digital Studios years ago, they pretty much started with no online presence at all. Fast forward, and we’ve worked together on multiple websites, and I’ve been able to get them ranked for competitive search terms around video production services in New Jersey. Because of that, they’ve been able to land a ton of new business, and have been able to bring on bigger corporate clients.

On top of that, we’ve most recently built an entirely new website for their in house recording studio as well. This site is also currently ranking on the first page for search terms like “recording studio paramus NJ” after only a few months.

You can check out the IMP Digital Studios website here – https://impdigital.us

Or you can check out the IMP Studios website here – https://impstudios.us 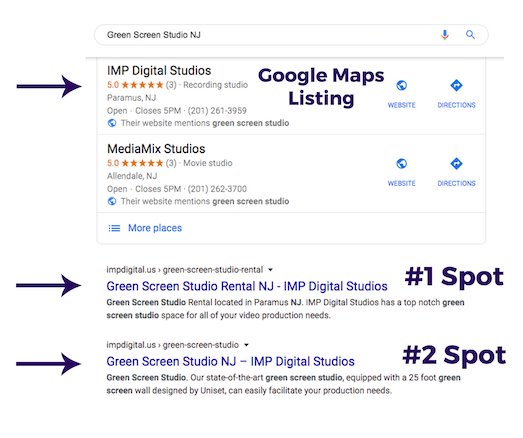 Berje Inc is a flavor and fragrance company with their headquarters located in New Jersey. They’ve got multiple other locations all over the world where they manufacture and source their lines of flavors and fragrances.

“Bringing Chris into the fold early was immediately constructive thanks to his ideas and quick execution in planning and developing our marketing initiative. Chris was able to balance the obstacles and find a solution that resulted a truly effective piece of marketing to this day. The success of this campaign along with many of the marketing plans in motion today are thanks to Chris’ consultation and guidance.” 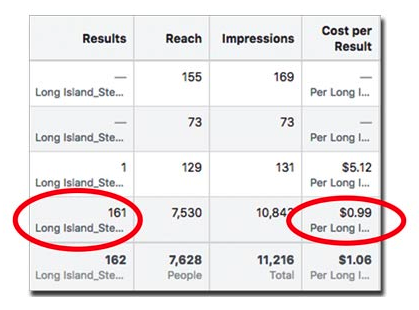